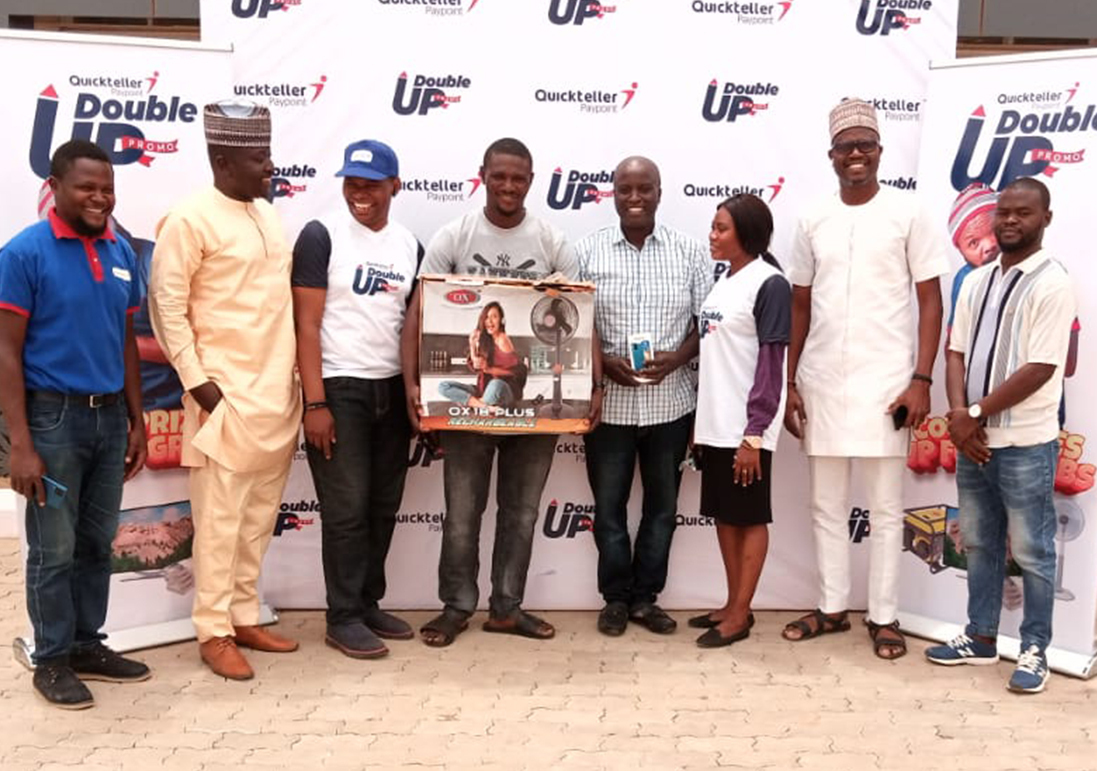 Six agents were recently empowered to transform their businesses when they emerged winners in the just concluded first set of raffle draws of the Quickteller Paypoint Double Up promo. The promotion, which is still ongoing, empowered the agents to serve more people in their communities with easily accessible banking services, improved technology and equipment, while racking up transactions and eventually winning.

Among other prizes, the winning agents carted away valuable items like television sets, smart phones, standing fans and branded items. These gifts are in addition to the commission they earned on every transaction they completed during the promo period.

Fatima Abidoye, the Platinum winner, who went home with a brand-new Television set, expressed delight on the gift presented to her and the benefit of working with Quickteller Paypoint.

“I am delighted for this gift, and I have had a positive experience working as an agent for Quickteller Paypoint. Their commissions have also improved the standard of living for me and my family, as I now earn more money. I urge them to continue to do more both in innovation and other aspects of life,” Fatima said.

Enejoh Aduku, the CEO of Green home Venture, who was rewarded with a brand-new smartphone as the gold winner in the Double Up promo explained that Quickteller Paypoint has done so well in empowering the youth and reducing unemployment in Nigeria, through their agents operating in all the regions in Nigeria and encouraged Quickteller Paypoint to keep up with the good work.

Similarly, three other winners who went home with standing fans also delivered their vote of thanks to Quickteller Paypoint and promised to intensify their efforts towards closing the financial inclusion gap in Nigeria.

Quickteller Paypoint is the agency banking service of Interswitch Financial Inclusion Services (IFIS), which currently connects agents across Nigeria to a reliable source of income via their agency banking platform

IFIS, the organisation behind Quickteller Paypoint, provides cheaper and convenient access to financial services to individuals and communities through agents across Nigeria.

Titilola Shogaolu, the Divisional CEO of IFIS, during the presentation of gifts to winners of the promo noted that the promotion was done to reward agents who have been consistent on the platform, while also encouraging them to do more with the service.

According to the DCEO, the first draw of the promo has seen 6 winners of television and generator sets respectively; 12 winners of smartphones; 24 winners of rechargeable standing fans; 120 winners of N10,000 wallet funding; and 2,100 agents received N1,000 worth of airtime. All the winners were selected based on different categories such as Platinum, Gold, and Silver winners. Agents were expected to complete a certain number of transactions to qualify for the promo draw.

Titilola Shogaolu also affirmed that Quickteller Paypoint is committed to ensuring that agents on the network are empowered and satisfied. “We have to constantly be on our toes to differentiate our product, provide optimal value at all times for the Agents, thereby maintaining our competitive advantage”, she said.

She also stated that winners were selected from the 6 geopolitical zones in Nigeria and were all contacted to receive their prizes, ​​with presentations conducted across the various regions.